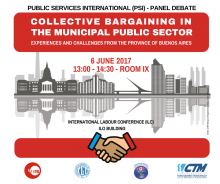 PSI is jointly organising a panel debate with the Municipal Workers’ Confederation of Argentina (CTM) and the Confederation of Municipal Workers of the Americas (CONTRAM-ISP AMERICAS) on the issue of Collective Bargaining in the Municipal Public sector focusing on the experiences and challenges from the Province of Buenos Aires and specifically on Act 14656 on Labour Relations and Collective Bargaining.

The Declaration of Fundamental Principles and Rights at Work, adopted in 1998, commits ILO Member States to respect and promote the principles and rights related to Freedom of Association and Collective Bargaining; the Elimination of all Forms of Forced Labour; the Effective Abolition of Child Labour; and the Elimination of Discrimination in Respect of Employment and Occupation, whether they have ratified the corresponding Conventions.

The recurrent discussion on the Declaration gives ILO constituents the opportunity to discuss global trends in legislation and practice in each of the four categories of principles and rights, as well as to analyse the progress made and the remaining challenges.

This panel debate - jointly organized by Public Services International (PSI), the Municipal Workers’ Confederation of Argentina (CTM) and PSI’s Confederation of Municipal Workers of the Americas (CONTRAM-ISP AMERICAS) – fits in this context. Act 14656 of 2014 on Labour Relations and Collective Bargaining of the Province of Buenos Aires, also called the “Paritarias” Act is an important achievement for  the public sector and municipal trade union movement in Argentina and in the world.

This legal instrument requires local authorities to negotiate with municipal trade unions the working conditions and salaries for local government workers. Besides, Act 14656 establishes the principles of inalienability, social justice,  free proceedings for the worker, primacy of reality, indemnity, progressiveness and, in case of doubt, interpretation in favour of the worker, which had already been set forth in the Constitution of the Province of Buenos Aires.

Within this legal context, public workers and employers find an adequate framework to regulate working conditions and salaries, empowering workers to become proactive subjects of their collective agreements through their trade union organizations. However, collective bargaining does not exist in most of the country’s 2,189 municipalities and is partly and formally established in only 44 of the 135 municipalities in Buenos Aires province, where Act 14656 is in force.