Chile: FENPRUSS updates its “Another Health System Is Possible” proposals 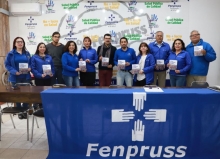 The National Confederation of Health Service Professionals (FENPRUSS) has enthusiastically begun work on updating its proposals for strengthening and defending the public health system in Chile.

This important work is taking place with the valuable support of Matías Goyenechea and his team from the Creando Salud Foundation, who will be calling on a range of academics to contribute ideas on the four components that we hope will complement the work that has already been completed by the organisation.

This work will build on material included in the document La Reforma del Bicentenario de la Fenpruss and the booklet La Salud que Soñamos es Posible (Another Health System is Possible) and will deal with issues such as the constitutional right to health, strengthening the public health system and its operation, funding and human resources.

“We have decided to take this important step because we must contribute to the discussion on the health reforms that Chile needs. We already know a lot about the situation and this task represents one of our union’s key areas of work. We have pressed for a bigger and better public health system. We have defended the system through our proposals, ideas and actions in the street in the 23 years since FENPRUSS was founded”, said Aldo Santibáñez, national president of FENPRUSS.

Santibáñez explained that the results will be validated in the same way as before, that is, at a national meeting, so that the final document produced with the help of contributions by academics and specialists on the issue of health can reflect the thoughts of all FENPRUSS members.

Matías Goyenechea, adviser to the union, said that the work aims to be participatory and to contribute to the discussion on health reform in the country. He said that it builds on work already done by FENPRUSS in its booklet Salud que Soñamos es Posible.  “We want to analyse the difficulties and inequalities in the system and we hope we can achieve this by updating the union’s proposals for the health system”.

“We want it to be a participatory process that takes on board the aspirations of all those who believe in a strong and high-quality public health system able to make progress towards providing timely and supportive health care for all Chileans”, said the FENPRUSS national president.