Castries Declaration on Debt Sustainability and Financing for Development 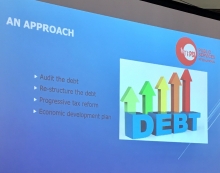 PSI affiliates in the Caribbean sub-region adopted a joint statement on Debt Sustainability and Financing for Development in Castries, St Lucia on 5 July.

PSI organized a workshop on debt sustainability in Castries, with the participation of Jubilee USA network and Jubilee Caribbean, during which case studies were examined and the impact of the recent hurricane season was discussed. PSI affiliates also learned more about the on-going work of potential coalition partners. This is part of PSI’s work on Financing for Development and the 2030 Agenda. A task force will be set up to develop a workplan to support affiliates in the region.

Castries Declaration on Debt Sustainability and Financing for Development,
Adopted by PSI’s Sub-regional Committee for the Caribbean, St Lucia, 4-5 July 2018

INTRODUCTION // Projections are that, on its present course, by 2020, debt will remain unsustainable in eleven Caribbean states which are among the twenty most indebted states in the world, and there will be no change by 2030 when the UN’s Agenda for Sustainable Development will have run its course.

The consequences of sovereign debt crises are devastating. They usually include cuts to health, education and other social services, privatisation, unemployment, cuts to workers’ real wages and conditions, cuts to pensions, raising regressive taxes on labour and consumers and undermining democracy as sovereign governments become dependent on financial institutions such as the World Bank and IMF (IFI’s) and their conditions.

The rhetoric that countries are undisciplined and that people have been living beyond their means is rarely true. More often, sovereign debt is due to political incompetence and/or corruption of governments and to their protection of the interests of domestic and global elites. Creditors also are co-responsible for creating unsustainable debt levels. Additionally, governments of the richest countries fail to impose international rules that would force their Multi-national Enterprises (MNEs) to pay tax where they operate.

DISCUSSION // During the meeting on debt sustainability and financing for development, we heard intense testimonials from PSI affiliates in the region, making it very clear that debt restructuring is at the heart of the concerns of the trade union movement. When debt default is looming, it sways like a sword of Damocles above public services and proper funding of public goods. It was noted that the immense sovereign debt many Caribbean countries are faced with is the consequence of bad old credit agreements, high interest rates and recent policy choices that only aggravate the situation through the proliferation of public-private partnerships, both in infrastructure and service-provision.

Recurring natural disasters have deepened the debt crisis substantially, making it even more difficult to weather future hurricanes and other emergencies. Due to decades of de-funding public services and lack of investment in infrastructure these have been weakened, reducing the capacity of Caribbean states to respond to the challenges climate change generates, while making it also ever more costly to recover from these devastating events. A further cycle of de-funding, reducing public services and worsening working conditions are the immediate result of debt restructuring packages as proposed by the IFIs. While the last hurricane season was recorded as one of the most violent in recent history, according to experts the next one will be no less terrifying.

Some islands, like Dominica and Barbuda, have suffered massive damage, while others have been less affected. What all states have in common is the threat to public services and a need to respond to the neo-liberal mantra of privatization and the empty promises of PPPs. Caribbean states are mostly middle and high-income countries, which therefore have no access to concessional funding. Servicing high debt in combination with low growth, narrow fiscal space and foreign exchange deficits have a negative impact on sustainable development.

PSI and its affiliates have another vision for the future. We need a policy shift to be able to deliver a human-rights based agenda, with a key role for public services, putting people over profit and ensuring people-first development. Governments need to take the commitment made in the global compacts seriously and step up to the plate, instead of giving way to the interests of the few.

Resisting pressure from a handful of multinationals in each sector, looking at their track record in other countries and regions, analyzing the driving forces behind privatization and PPPs are at the heart of such a strategy. We need to closely monitor and analyze existing PPP agreements on water, airports, prisons and other sectors, which also means evaluating the social and budgetary impact of such arrangements. We need to have a holistic vision of the financial, taxation and trade policies required to defend and promote public services for all, provided by public actors – and that includes promoting progressive taxation systems and making sure that all economic actors pay their fair share, as clearly stated in PSI’s Programme of Action adopted at Congress in November 2017.

PSI affiliates recognize the constructive contribution made to the meeting by Jubilee USA Network and Jubilee Caribbean, and their proposal on debt relief as a crisis response. Debt relief has the potential to provide immediate access to resources, which are already in the hands of the authorities and thus do not have to be mobilized through lengthy pledging exercises. They will normally have been earmarked for debt service in the national budgets. And they would be mobilized for emergency relief and reconstruction only in cases of obvious and undeniable need.

The process would imply two debt relief operations, which would respond to two dimensions of the crisis: a debt payment moratorium which would make any resource from the government to external creditors immediately available for emergency relief, and a pre-designed framework for restructuring the entire stock of existing public external debt in a way which provides enough fiscal space for medium-term reconstruction under the premise that the country should not find itself in another debt distress situation when confronting the next crisis within the statistically average timeframe.

CONCLUSION // Therefore, PSI affiliates declare that we are committed to developing both a national, sub-regional and global response on debt sustainability, that will focus on capacity building, advocacy and coalition-building to: audit sovereign debt; propose alternative solutions to re-structure debt; in combination with progressive tax reforms and economic development plans. This requires developing skills, building partnerships with like-minded organizations and strengthening young workers’ groups in unions.

Debt sustainability packages must include legislation to ensure budget responsibility and accountability, reduction of debt to private and hold-out creditors, plans to prevent austerity and curbing of professional and corporate tax avoidance to protect public sector jobs. We aim for a significant involvement in IMF and government negotiations, through lobbying Caribbean ambassadors, finance ministers and prime ministers.