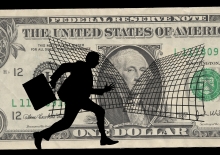 The Australian Tax Office (ATO) is outsourcing contracts worth hundreds of millions of dollars to multinational corporations with aggressive tax minimisation strategies, a new report reveals.

The report by the Centre for International Corporate Tax Accountability and Research (CICTAR), examines the dubious practices of Serco, Stellar and Outsourcing Inc, who together hold contracts worth more than $250 million with the ATO.

Serco, known for its immigrant detention and private prison business, is the largest provider of outsourced labour to the ATO, with contracts worth over $120 million. The report discusses how Serco’s reputation is so questionable that even Appleby, the law firm at the centre of the Paradise Papers tax-scandal, considered them a “high-risk” client with a “history of problems, failures, fatal errors and overcharging.”

Stellar Global, awarded over $50 million in ATO call-centre contracts, recently garnered controversy after declaring their European branch bankrupt, owing over $200,000 USD to the UK tax authority and avoiding redundancy payments for its workers. Less than a month beforehand, Stellar Europe made a payment of over $100,000 USD to its parent company - a shell entity in the British Virgin Islands.

“To have a Government tax authority privatising its services to tax dodging corporations is neoliberal policy brought to its logical conclusion. Frank and fearless public servants are being replaced, under the guise of austerity, by hired guns, beholden to many of the same interests who deprive governments of the funding needed for quality public services in the first place. The increasing use of outsourced labour by in both the public and private sector is eroding workers rights, fueling the growth of precarious work and reducing the institutional capacity of the public sector to deliver quality public services.”

The CICTAR report makes a number of recommendations for policy makers including for full public disclosure of the ultimate parent company and/or all beneficial owners of any government contractor and full transparency for all public contracts.

“These companies -- with disturbing track records – are driven to maximise profit, not provide public services. The experiment in public sector outsourcing has gone too far and failed everyone except the corporations taking the money. All government contractors should be made to pay their fair share of tax and be fully transparent and publicly accountable. We have made some sensible and relatively easy to implement recommendations to make that happen.”

“There’s a sad irony here, that the Tax Office seems to have the clearest examples of tax avoidance among Government contractors. This is a huge problem for our entire tax system, as it shows there’s one rule for ordinary people who pay their tax and another for these companies being handed that same money through Government contracts."