On 6 June over 50 thousand trade union members and workers from all over Ukraine gathered in Kyiv for the All-Ukrainian Protest March. Under the slogan «EUROPEAN PRICES - EUROPEAN WAGES!», they rallied near the Parliament and Government houses, protesting against the shock increases in gas price and communal tariffs.

They responded to the call launched at the meeting of the FPU Council on 23 June. The Council elaborated a joint trade union position concerning shock increases in gas price and communal tariffs, and adopted a plan of actions to protect workers.

Trade unions stressed that the question is not only about reducing prices and tariffs but first of all about increasing wages and social standards. 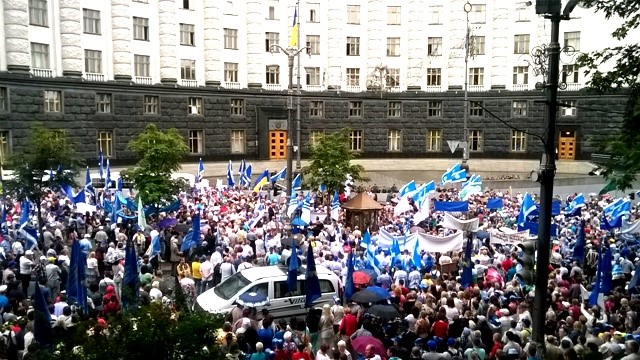 One of the possible options to mitigate the consequences of the price shock is to increase income of the population by raising minimum wage and minimum pension at twice the current amounts, to bring them in line with the living wage. As a second option, trade unions also proposed to raise wages and simultaneously reduce gas price.

Addressing the protesters, FPU President Grygoriy Osoviy stressed that the Government should listen to the workers’ voice and address the issue of tariffs and wages. “We will make the Government and the Parliament address the tariff issue. Today we will hand our demands and proposals to the Prime-Minister and MPs. MPs should not go on holidays until they solve this issue. We are ready to block the Parliament. Workers’ wages should reflect the actual living wage. It means that minimum wage should be at least UAH 3000 and the average wage should be UAH 8-10 thousand”.

Participants in the All-Ukrainian Protest March passed the Resolution. 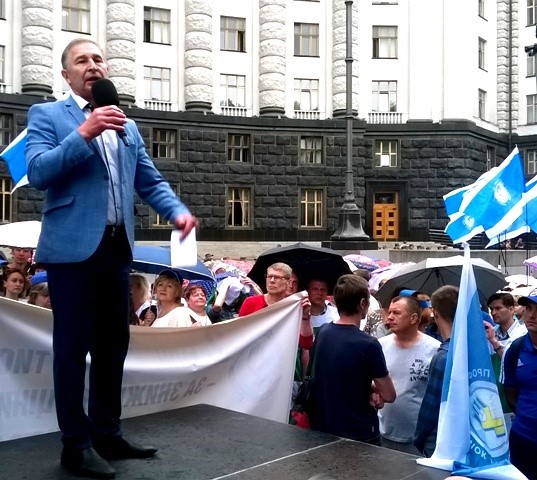 - from the Government and Parliament of Ukraine – to reform the wage system; to set from 1 October minimum wage at the level of fairly calculated living wage of UAH 3067 with respective increases in pensions and students’ scholarships;

- from owners and employers - to increase from 1 August workers’ wages at least by 15%, for the account of savings from two-fold reduction in the level of single social contribution;

- from Parliament members - to immediately hear the report of the Government on its price policy and social protection measures; to pass decisions to prevent reduction of living standards of the population.

Boxes with trade union demands signed by people from all regions of Ukraine were handed to the Parliament and Government of Ukraine. As of today 2 million 345 thousand signatures have been collected.

Later in the day the trade union delegation headed by FPU President Grygoriy Osoviy met with the Prime-Minister and passed him trade union demands and proposals.